Traditional retail markets in the UK caught between a narrative of decline and revival, on the edge of a gentrification frontier. A paper by Sara Gonzalez and Paul Waley highlights the precarious state of many traditional retail markets in the UK as local authorities seek to offload non-core activities and realise the real estate value of their properties, making markets a target for privatisation and gentrification. Traditional indoor and outdoor markets have become somewhat residual in many British cities but essential for many low income citizens that rely on their affordability. At the same time, the market is being reinvented for a wealthier type of customer interested more in local, environmentally friendly, ethical and “authentic” shopping experience. So far, the incipient gentrification of markets has received little academic attention although there are several campaigns, particularly in London, to defend their public nature.  Indoor and street markets in the UK are important working class spaces and represent a challenge to corporate businesses. We take the case of Kirkgate Market in Leeds, the largest of its kind in Britain to analyse the process of disinvestment by the local authority, displacement of traders and customers and rebranding of the market for a new wealthier customer base. The paper is based on an action-research project on which one of the authors is involved alongside traders and other campaigners to defend the public nature of Kirkgate Market in Leeds. Download this paper here. 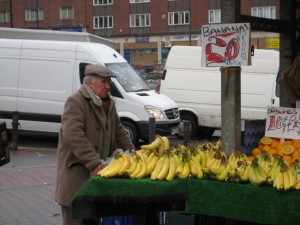