The Escuelita Zapatista, celebrating 20 years of resistance and struggle in Chiapas, Mexico 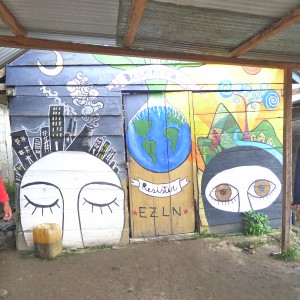 Claudia Villegas, a visiting researcher from Universidad Nacional Autónoma de México, will talk about the recent experiences of the ‘Escuelita Zapatista” (‘Little’ Zapatista School) that marked the 20th anniversary of the Zapatista uprising against the Mexican government and the North American Free Trade Agreement in the southern state of Chiapas. The Escuelita consisted of gatherings organised by the Zapatista Army for National Liberation (EZLN) in rebel territories, to share with national and international civil society their experiences of building autonomy and self-government through twenty years of peaceful resistance and community self-organizing.

Jacob Wills from the Radical Housing Network in London will be talking about growing opposition to the international property fair, MIPIM, which is taking place at London’s Olympia on 15-17 October. MIPIM is the world’s largest property fair, and attracts around 20,000 investors, developers, local authorities, and banks at its annual meeting in Cannes, France. Jacob will be explaining why housing campaigners in London see MIPIM as a threat to affordable, secure housing in the city.